BAD ROAD: THE MAIN CONCERN OF OSUN STATE RESIDENTS IN 2021. 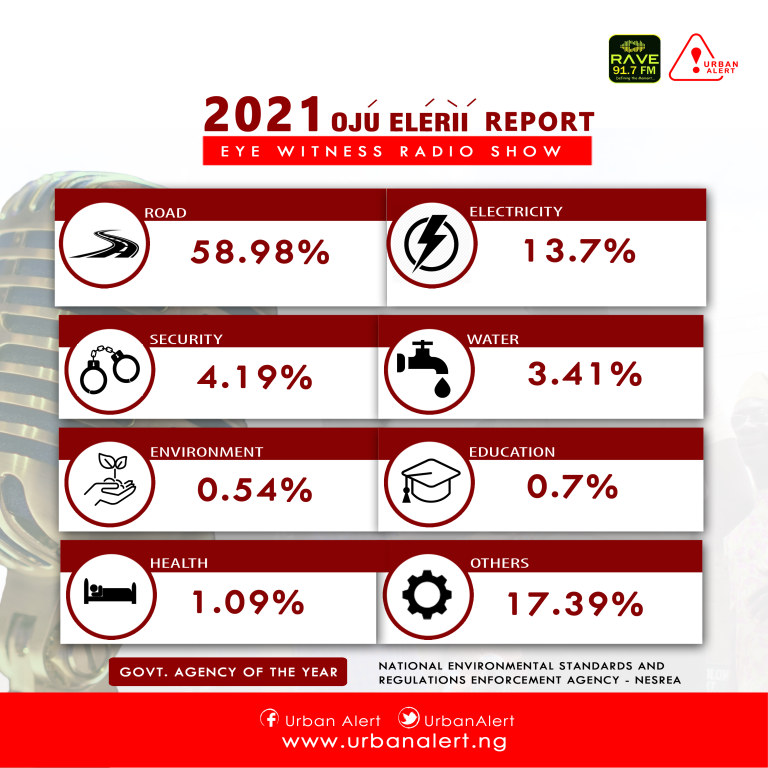 Data from Oju-Elerii, our eye-witness partnered radio program with Rave 91.7FM Osogbo has revealed that bad road is the biggest concern of the residents of Osun State in 2021.

Oju Elerii (Eye Witness) is a weekly radio program where citizens call in to express their displeasure over the problem they are facing in their community. Issues tabled by the citizens are then amplified via the program and other platforms so that government agencies and elected public officials can take appropriate steps.

Furthermore, 13.7% of the Complaints received was electricity-related. Citizens decried continuous injustice and corruption meted on them by the Ibadan Electricity Distribution Company (IBEDC), especially for their continuous refusal to deliver electricity prepaid meters to those who paid for the devices between 2015 and 2017. Callers also expressed their displeasure over the inability of the Ibadan Electricity Distribution Company (IBEDC) to repair and replace transformers, leading to the poor citizens contributing to purchase transformers which end up being the property of the IBEDC.

On security, 4.19% called about the problem of land grabbers (Omo Onile), thugs and cultists in Osogbo, Ilesa and Ikirun. In addition, 3.41% of the 516 callers urged the Osun State Government to fix the Ede, Eko Ende Water Works and faulty water pipes in Osogbo, Ede and Ofatedo.

Complaints on the Osun River pollution, open defecation and improper refuse dump covers 0.54% of the callers. Also, the state of classrooms, school fees and other issues relating to education cover 0.7% of the calls received in the 50 Episodes of Oju Elerii in 2021.

However, many complaints amplified on Oju Elerii received the attention of government agencies and the elected public officials. These issues include; the return of contractor to the abandoned Osogbo-Ilesa Road, construction of parts of Ikirun-Eko Ende and GOF-Ori Oke Pure Water Roads, reconnection of Garage Olode Town to the national grid, supply of transformer to Kuliyah Community, Osogbo among others.